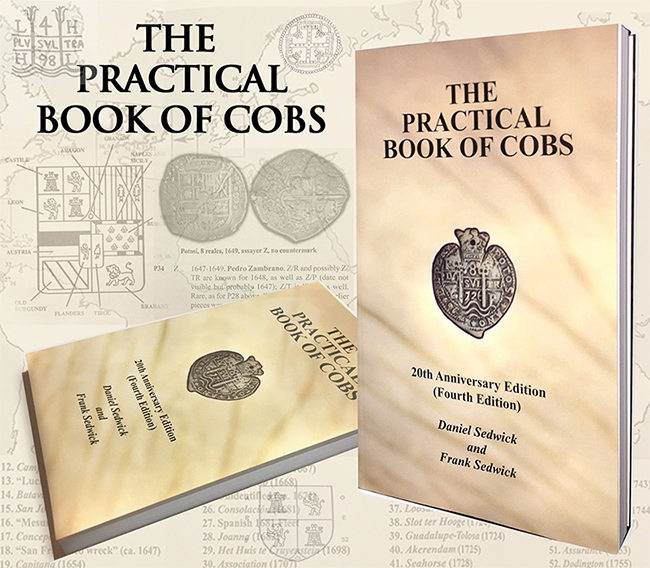 Product Description: The Practical Book of Cobs is a reference book on Spanish colonial coins by Daniel Sedwick and Frank Sedwick. First published in 1987, the book has been re-released three times, most recently in a 20th Anniversary edition (4th edition) published in 2007. An essential guide and reference work for divers and shipwreck enthusiasts, this book offers information that is not readily available or only available after searching many reference works or auction catalogs. This book covers the mints, assayers, styles, and types of “treasure coins” from the period 1536 at the Mexico City Mint until 1773, the end of cob-type coins minted at the Potosí Mint in Bolivia. In addition it has a section that goes over each of the most famous treasure wrecks of all time including the Atocha, the Spanish 1715 Fleet and many others.

Reviews: - "Dan Sedwick has produced a fourth edition of The Practical Book of Cobs. In it he has carefully revised and enlarged assayer descriptions and very importantly for any and all researchers, he explains the rationale for his conclusions. He's added a new section giving a list of fifty-five treasure ships and their cargoes and has compressed virtually every important fact known about cobs today into this well structured volume. It is well written—lucid and logical—and is a meaningful addition to cob coin literature that should be included in everyone's library. I wish that I could do as good a job as Dan has done." - Joe Lasser, The E-Sylum: Volume 10, Number 36, September 10, 2007, Article 2

- “This popular book has been out of print since 1995 and unavailable for a number of years now, so this [fourth] edition should be a most welcome addition to the market! Greatly expanded from the previous edition (more than 100 pages longer!), this 20th Anniversary Edition contains a long new section on the shipwrecks that have yielded cobs over the years, complete with a foldout map and specified bibliographies for each wreck. Also, the assayer section incorporates the latest research information, with specimen photos of most of the assayers (not separated into a photo section as before). The values in the back, of course, have been updated. What has not changed, however, is the appeal to both beginners and advanced collectors alike, as well as dealers and jewelers who work with cobs. The Practical Book of Cobs offers readers a look at the following topics: Historical background / Elements of design / Market values / Extensive bibliography / Complete ID of mint marks, assayers, and period / How cobs were made and used / Treasure Fleets and other shipwrecks that produced cobs / How to buy and sell, and how to spot counterfeits.” – Ernest Richards, PLUS VLTRA Newsletter: Enrada Publications, October 2007


The Practical Book of Cobs is the only reference of its kind that puts together the Spanish Colonial hammered coinage of the Americas with the history behind the shipwrecks around the world that carried these coins. The budding field of such "treasure coins" is attracting not only collectors but also investors. Both scholarly and elementary, this book is ideal for teaching all ages and genders about treasure coins and the rare coin business in general. Previously sold privately within the coin-collecting community, this book was recently featured on the Internet on several important websites and is now being offered to the general public. 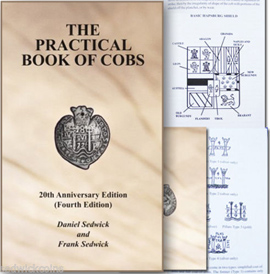 Topics: Historical background | Elements of design  | Complete identification of mintmarks, assayers and periods  | How cobs were made and used  | Treasure Fleets and other shipwrecks that produced cobs  | How to buy and sell, and how to spot counterfeits | Extensive bibliography | Market values

Awards: The Practical Book of Cobs, 4th edition (20th Anniversary edition), by Daniel Sedwick and Frank Sedwick was given an award for Extraordinary Merit in the Best Specialized Book category by the Numismatic Literary Guild (Annual Writers' Competition 2008). The same award was bestowed on the original edition in 1987.

What is a Cob coin?

By reading The Practical Book of Cobs we understand that "cobs" are the original "treasure coins." Struck and trimmed by hand in the 1500s through 1700s at Spanish mints in Mexico, Peru, and Colombia (among others), silver and gold cobs are handsomely crude, nearly all with a cross as the central feature on one side and either a coat-of-arms (shield) or a tic-tac-toe-like "pillars and waves" on the other side. Silver cobs are known as "reales" and gold cobs are known as "escudos," with two 8 reales (about 27 grams each) equaling one escudo. Some cobs were struck with a date, and most show a mintmark and an initial or monogram for the assayer, the mint official who was responsible for weight and fineness. Size and shape were immaterial, which means that most cobs are far from round or uniform in thickness. Cobs were generally accepted as good currency all around the world, and were the exact coins pirates referred to as "pieces of eight" (8 reales) and "doubloons" (any gold cobs but originally 2 escudos).

Special Orders:  Individual books signed by the author are available upon request.   Books without the index on coin prices are available in very limited quantities (suitable for jewelers)  Limited-edition hardcover books (ideal for book collectors) are available singly for a higher price. (If you want to place an special order please contact us directly by phone)

Phone: If you want to order directly by phone please call: 407.975.3325 or email office@sedwickcoins.com

We welcome your order, want lists, comments, material for sale or consignment and suggestions.